This morning we put up the downpipe for the verandah gutter. First I assembled all the tools we would need. Most of them were handtools except for the cordless drill. 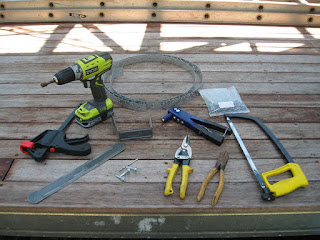 Then I drilled the top of the downpipe where it attached to the downspout and riveted the holes together. 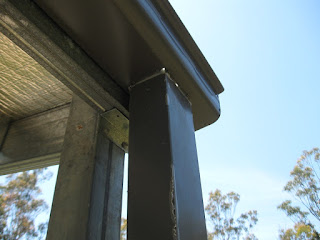 Then at the bottom we needed a piece to join the gap between the decking and the verandah post, and push it outwards a little so that it would end up at the perfect spot for the water to flow into the 100 litre tank which we will place underneath it. This piece of metal was a left-over piece from building other parts of the house, and just happened to be the perfect size. It was trimmed a little at the ends to ensure it had a flat surface for the downpipe to press against. We were provided with downpipe brackets which we used for the outside join, and cut a short length of strapping which was left over from strapping the frame of the house. After these were screwed on, the structure was very solid and stable. 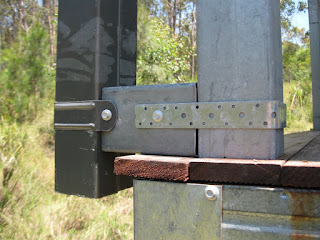 After that was finished, I climbed up onto the verandah roof and put silicone over all of the roofing screws. I also washed out the gutter as it was full of metal filings from attaching the screws. We won’t put the 100 litre water tank under the downpipe quite yet, as I want to wait until we have some rain to wash the roof and the gutter clean. No rain is forecast for the next week, so we might be waiting a little while.

First we assembled the gutter for the verandah, this was relatively straight forward as we had done exactly the same thing for the house verandahs previously. For the stop ends, holes were drilled through and then riveted together. 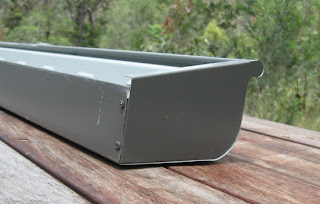 Then for the downspout, a rectangular hole was cut in the gutter, the spout put in place and then holes drilled and riveted together. 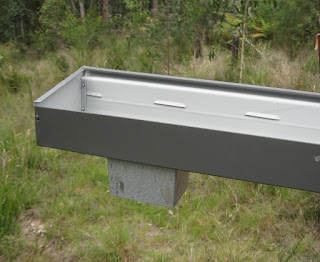 To finish the whole thing off, silicone was spread over all the joins. Here is our collection of tools for this job. 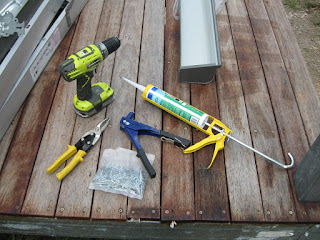 Then I spent an afternoon and two mornings screwing in the gutter brackets. First one was put at the top end, and then another put at the bottom end with a 20mm fall. Then a string line was stretched between those two, and the other brackets screwed in to follow the string line. 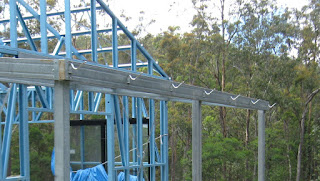 After leaving the silicone to cure, we put the gutter up into the brackets, this was easier than I expected – since the gutter is slightly over 6 metres long it is a little difficult to handle while standing up a ladder, but one of our best 'tools' is an old broom which we found at the tip. I used the broom to push the gutter to click into each bracket while Josh held it up, and then he folded down the clips over the top. 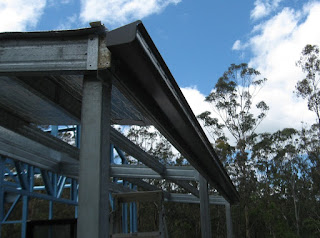 We decided that it would be worth the effort of putting insulation underneath the roof sheeting, so we cut up one of the rolls which was provided with the kit home into sections which fit the width of the verandah. By lucky coincidence our 180cm level was exactly the right length so I used that as my measuring stick. 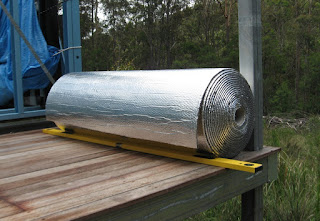 This is the paperwork that came with the insulation, which I suppose we will have to show to the council when it comes time for approval that we met the energy requirements for Basix. 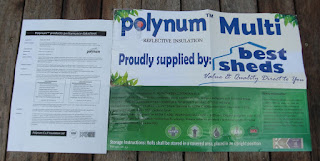 Then we joined the pieces with rolls of insulation tape. This is a special type of tape which is a cross between gaffa tape and alfoil. This photo is looking up at the underneath of the roof after the insulation was placed on the top.

We were provided with 8 sheets of colorbond which were 187cm long and 85cm wide, so we laid them on the ground to measure how much we should overlap them to achieve our 6 metres for the verandah size. They are laid upside-down in the photo, showing the underneath colour. By the time I took the pic, we had already taken away a piece to put on the roof. 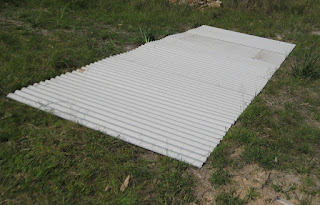 This is the colour of the top of the sheets, it is known as Slate Grey. This is the first time we have actually seen the colour, and it is actually a lot darker than I was expecting. 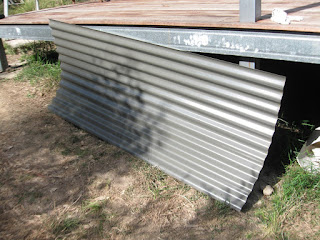 Then Josh got up on the roof and laid the sheeting, screwing it in as he went. The perfect length was achieved by overlapping the last sheet a little more than the rest, luckily avoiding the need to cut a few centimetres off the end. The metal roof in the sun was VERY HOT, so I am glad that we put the insulation up, as it will keep it a lot cooler under the verandah. Even the blue framing metal is cool to the touch compared to the Slate Grey roof. I can't believe that we finished the whole thing in one day! It is actually very difficult to photograph, as by the time I am far enough away to see the roof there are small trees which block the view. I went up on the roof this morning and finished screwing the middles of the sheets, and the next thing that needs doing is to put silicone over the screws. After that we need to attach the downpipe to the gutter, and into a small tank. 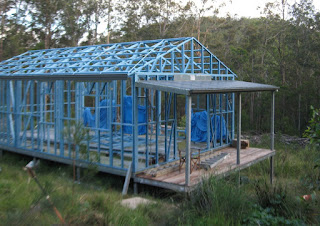 Posted by Sandrina at 20:04 No comments:

Just a quick tease of a photo of the finished deck roof which we started and finished yesterday. 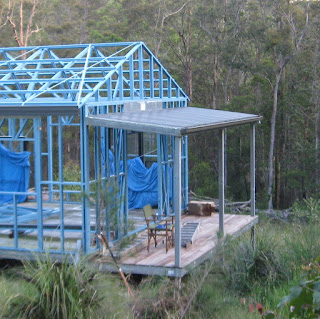 I would do a longer post but I want to get down there and finish screwing it in before it gets too hot this morning!
Posted by Sandrina at 12:25 No comments:

A few more days work and we now have the verandah beams up. First we had to put up the 6 metre long very strong, thick and heavy end beam. It was a tricky task to consider, but Josh had thought about it carefully and had a clever plan. First he screwed some brackets to the posts, one of which was held in with only one screw so that it could rotate. 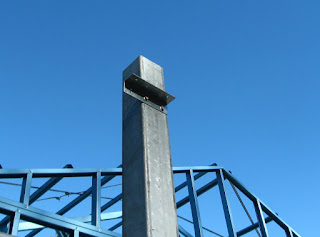 Then we lifted it up so that it rested on the rotating bracket, tied it to the post with some rope, and then lifted the other end up on the bracket on the other post and screwed it in. Once that end was secure, the first end was also screwed in. 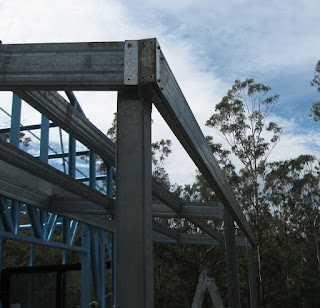 Then we put up the three cross beams. These connected to brackets which were on the posts, or on the big beam, and on the end of the house.which had already had their brackets screwed on while on the ground. The two end beams had two brackets each, facing inwards, and the middle beam had two brackets on each side.

Then we put up the four long beams, which slipped into the brackets on the cross beams. All of these beams required screwing through the brackets, which was around 60 screws altogether. 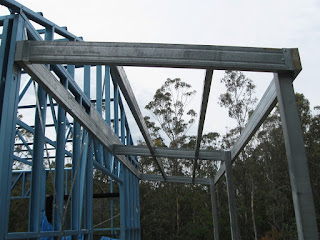 Each of these screws were through thick metal, and required very strong pressure to get them in. This was quite difficult at the top of a ladder, so for some of them we had one of use drilling, and the other person pushing on the end of the drill to get it in easier. This helped save us some muscle pain later down the track. 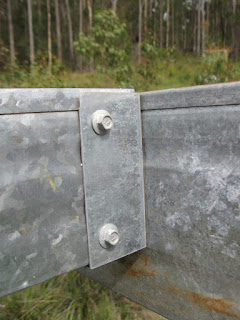 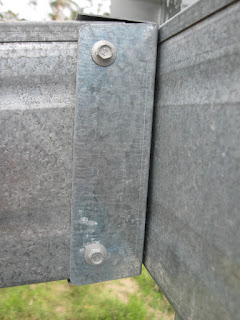 One side of the house was easy enough to get to from the ground, and we could use the ladder in its triangle form. 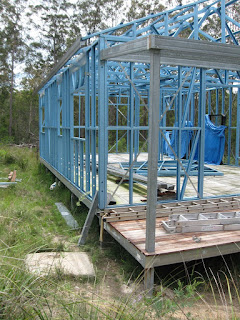 The other side of the house is a fair way off the ground though, and we had to extend the ladder to its full length. We moved this ladder what must have been hundreds of time, changing it back and forth from triangle to straight, on the deck and off the deck, and were very glad that we bought it many years ago when we still lived in Sydney. 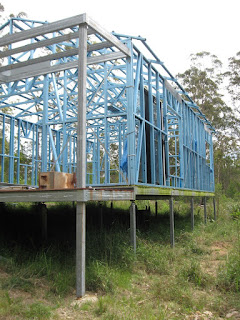 The next step is to put up the guttering on the end of the verandah, and to put the roof sheeting over the beams. The weather forecast is for thunderstorms! 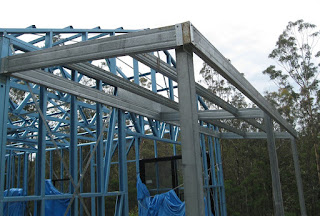 Posted by Sandrina at 19:13 No comments: